Raised: Any device or anomaly or a coin in positive relief above the field surface of a coin. This is the opposite of incuse.

Raw: Refers to a coin that has not been graded, attributed, and holdered (slabbed) by a third party grading service.

RDV-007: Varietyvista.com’s assigned number for the Lincoln cent’s reverse design designated for use only on business strikes from 1993-2008, and proof cents in 1993. This is a notable variation because it also appeared on the reverse of some 1992 business strike cents, as well as some 1998 and 1999 proof cents, known as close AMs or CLAMs, due to relative closeness of the A and M in AMERICA. (See also Transitional Design Variety and Wrong Design Variety.) Please see John Miller’s excellent tutorial Here.

Re-plated: Although any cent can be re-plated, this is most often seen on 1943 cents. The zinc-plated steel was frequently re-plated with various metals in an attempt to make them look uncirculated. This is considered post-strike damage and devalues the coin. A coin that has been plated or re-plated outside the mint will not have radial flow lines, be lacking mint luster, may show bubbling or pooling of metal especially along the devices, and be off color. 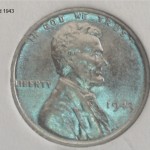 Re-punched Date: The practice of punching the date into the die ended in 1908; therefore, there are no re-punched dates in the Lincoln cent series.

Re-punched Mint Mark: On Lincoln cent business strikes, the mint marks were punched by hand into the Working dies up through 1989, and on proof coinage until 1985. Sometimes a punch contacted the die more than once; sometimes purposefully due to the first punching being unsatisfactory, or sometimes accidentally due to the punch bouncing or skipping during the initial hit. If subsequent hits by the punch did not line up exactly with previous punchings, a secondary mint mark would be created on the die and all the coins it struck. Most of these re-punchings were just slightly rotated from the first, and can be identified by noting split serifs. Many publications call these “tilted” rpms, but “rotated” might be a better term, since a punch could also be tilted on an angle of incidence into the die. 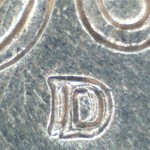 Red: The original mint color of a Lincoln cent. Cents naturally turn brown from exposure to environment and circulation. Third-party grading services denote a cent as “red,” “red/brown,” “or brown.”

Red Book: Also known as A Guide Book to U.S Coins, the Red Book is a most popular resource for coin values and information.

Red/Brown: A color designation used by third-party grading services to denote a coin that still has some original mint “red” color, but is starting to turn “brown” from environmental and circulation exposure.

Reduction Lathe Doubling: This form of doubling occurred on several master hubs in the Lincoln cent series. Since master hubs were often re-used over a span of years, this type of doubling will show on EVERY cent struck over a period of years that the master hub was used, and therefore carries no premium. Some refer to this as “series doubling.” The Janvier reduction lathe was the machine that was used to transfer the image from the galvano to the master hub. There were 2 arms, one which traced out the image on the galvano, while the other cut a smaller version of the design onto the master hub. This would require many passes by the arm to do, and if there was a slight slip of the arm during the process, the design would be recreated in a slightly different place, creating this doubling. Some of the master hubs that had reduction lathe doubling on them were:
1. The 1909 reverse master hub, showing on the bottom of some of the letters in CENT and UNITED STATES OF AMERICA. This showed up for several subsequent years as well.  Images by Jallengomez. 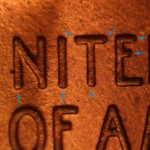 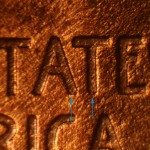 2. The 1909 obverse master hub on the BE of LIBERTY and the W of We. The extra thin bar on the vertical of the B and the extra notches on the W can be seen spanning many master hubs and exhibits for many years until they were redesigned in 1955. 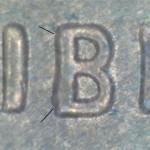 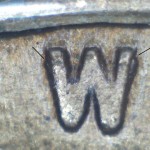 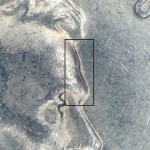 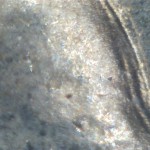 4. The D of God had “doubled” vertical bar starting with the 1922 Master Hub and continuing until the mid 50s. 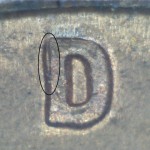 Relief: In numismatics, relief refers to the difference between the high and low points in the coin’s design elements. However, when preceded by the word “in,” as in “the anomaly is in releif,” it usually means raised.

Retained Cud: This is a rim-to-rim die break that hasn’t completely fallen out of the die. There is usually some lateral or vertical shifting of the broken piece, which will show on the coins it strikes, although the design will be largely intact in that broken area on the coin itself.  Please visit cuds-on-coins.com to see listings for retained cuds. 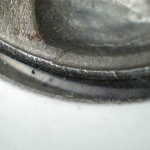 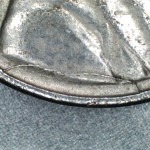 Retained Interior Die Break: This is an interior die break that hasn’t completely fallen out of the die. Since the piece hasn’t fallen completely out, some design elements may still be seen in the area on the coins it strikes, even though there may be lateral or elevation shifts. Please visit cuds-on-coins.com for listings of retained interior die breaks.  Photos donated by Bella. 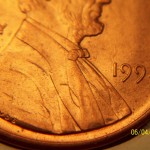 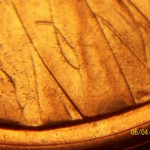 Retained Lamination: This is simply a lamination peel that is still attached to the coin. 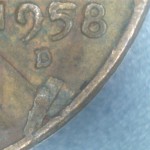 Retained Struck-through: This is simply a struck through error where the foreign object is still attached to the coin. 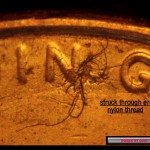 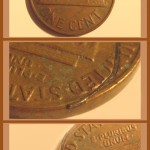 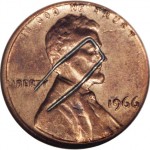 Reverse Design Variety: Any of the minor or major reverse design changes over a series’ run. The RDV# designations commonly used for Lincoln cents are proprietary to (and can be seen at) varietyvista.com.

Riddler: A sifting device which removes both oversized and undersized coin blanks, planchets, or coins, allowing only the proper sized ones to continue on in the coin production process. Also, one of the arch-enemies of Batman.

Ridge Ring: One of the many manifestations of die deterioration, a ridge ring is a circular area of distortion that goes around the perimeter of a coin near the rim and is the result of cold-metal flow toward the rim from the striking process. These are most commonly seen in the 1980s.  Photos courtesy of jay4202472000. 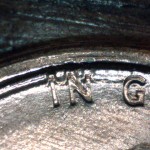 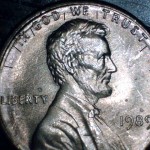 Rim: The rim is the raised part of a coin that encircles the perimeter on the obverse and reverse of a coin. A proto-rim is created by the upset mill and the finished rim we see on a coin is completed by the striking process. Do not confuse this with the edge of a coin. 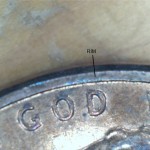 Rim Burr: This is a form of pre-strike damage to the rim caused by the feeder finger, whereby a portion of the proto-rim is “sliced” or “gouged” up and subsequently struck into the coin face. The burr can be still partially attached to the rim, or can be completely detached and struck into the coin face in any location and orientation. Many of these are being found recently on shield cents. Photos courtesy of forum member Jacob. 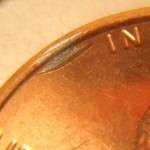 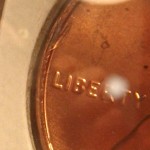 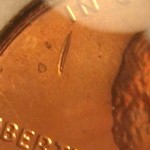 Rim Cud: A cud appearing only on the rim of a coin and is the result of a part of the die’s rim gutter being broken off. 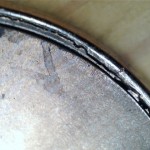 Rippled Coin: This is a form of post-strike damage that causes a doubling (or multiple) effect on the devices. Just as the name suggests, the coin exhibits ripples on its surface, often following the contours of the devices giving them a doubled/tripled/quadrupled appearance. The exact cause(s) are unknown, but contact with an acidic substance is one theory. Photos courtesy of forum member Liz. 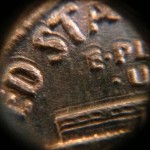 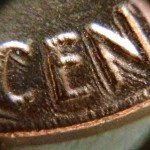 Rockwell Hardness Test: A test done at the mint to determine if a planchet or die is of appropriate hardness. The test involves pressing a small metal ball into the planchet or die and measuring the depth of the resulting cavity. This smooth round or oval cavity can be sometimes seen on struck coins. Please visit this link for more information and photo examples. http://conecaonline.org/content/RockwellHardnessTest.html

Roll: A determinate number of coins of a like denomination held in a paper wrapper. A full Lincoln cent roll has 50 cents in it.

Rolled Thin (or Thick) Planchet Stock: The sheet metal from which coin blanks are cut can sometimes be off-spec, being too thin or too thick. Coin blanks cut from rolled-thin stock will result in an thinner, underweight coin and, because of its thinness, may not receive a full strike. A coin blank cut from rolled-thick stock will be thicker and overweight. A cent should be 1.52 mm thick. Copper-alloy cents should weigh 3.11 grams, and copper-plated zinc cents should weigh 2.5 grams.

Roller Lines: These are very thin parallel striations, often seen on both the obverse and reverse going in the same direction. Though sometimes blamed on improper alloy mixture, these thinner, more even lines are more likely from dirty or damaged rollers from the rolling mill when it was reducing the planchet stock to the correct thickness for coin production. More commonly seen in the late 70s and early 80s. Photo courtesy of jmangham. 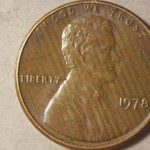 Rotated Die Strike: This is when a coin is struck by dies that are out of correct rotational orientation with respect to each other. When you turn a normally orientated U.S. coin over in a “north to south” or “top to bottom” direction, the design on the opposite side should now also be correctly oriented for viewing. This will not be the case if the dies are out of rotation. The mint tolerance for die rotation is 15 degrees, but coins with struck by rotated dies don’t start to command a good premium until the die rotation is much greater than that. There are several instances in the Lincoln series with the most well-known being a 1994 with 165 degree rotation.  Below is a 1994 with 165 degree rotation, and a 1910 showing 90 degree rotation.  Photo of the 1910 courtesy of forum member duck620. 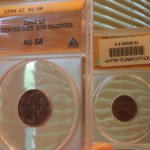 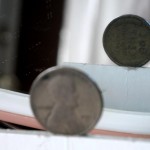 Rotated Hub Doubling: Also called a class 1 doubled die, this type of hub doubling results in the most dramatic and coveted of doubled dies. This occurs when a second hubbing of a die is rotated either clockwise or counterclockwise from the first, from the center point of the die, thereby creating equally strong doubling around the entire perimeter of the coin face of the coins it strikes. The most well-known doubled dies in the Lincoln series (and in the entirety of numismatics) are class 1, such as the 1969S 1DO-001 and the 1955 1DO-001. Please see Jason Cuvelier’s excellent tutorial on the subject Here.