Tail(s): A colloquial term for the reverse of a coin.

Tapered Planchet: This is a planchet whose thickness is not consistent around its perimeter. It will exhibit an area of thinness at which it will subsequently receive a weaker strike than the rest of the coin, resulting in weak or missing devices. These tapered planchets are created when an error occurs in their production in the rolling mill. Photos donated by forum member 2Old. 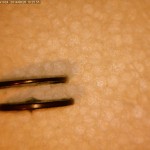 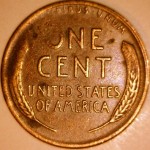 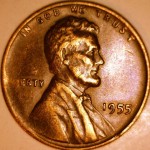 Texas Cent: A cent with a larger-than-normal diameter that was intentionally damaged outside the mint.  The traditional method is hammering the cent between pieces of (usually) leather.  However, another instance of cents with larger-than-normal diameters is now commonly seen on cents that have had their plating removed.  Whatever methods are being used to strip the plating, most of which involve exposure to chemicals and heat, are leaving the resulting zinc core thinner with an expanded diameter.  I am still trying to investigate exactly how this is happening. Below is an example of one of these stripped cents. Photos courtesy of jallengomez. 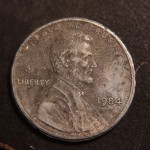 Tilted Hub Doubling: Also called a class 8 doubled die, this occurs when the hub’s angle of incidence (in relation to the die) differs between its hubbings.  Image below courtesy of Jason Cuvelier.

Toning: The changing of a coin’s original color through either natural or artificial means. Lincoln cents naturally tone from Red to Brown by exposure to handling and environment. Coins may also tone as the result of the packaging in which they are stored. Certain paper used in early mint sets have caused some unusual toning on coins over the years, and sometimes this toning can increase a coin’s value dramatically if the toning is attractive. Others have used various means to intentionally tone coins in an effort to sell them for a premium, and this practice can be considered post-strike damage.

Trail Die: Generally speaking, trails are parallel raised ridges which extend away from the corners of a coin’s design elements. They are strongest at the point where the device meets the field, and then taper off as they extend into the field. They vary in strength from naked-eye obvious to barely perceptible under magnification. A single coin can exhibit multiple sets of trails going in multiple directions. These ridges are created during polishing of the die by a rotary tool. A soft buff or bristles penetrate into the die’s recesses, gather in the corners of those devices, and then erode a gouge into the die as they exit the recesses into the higher relief of the field. Trails can also occur on a coin’s incuse devices, which are raised on the die. In this instance, the buff or bristle concentrate against the raised wall and gouge out a trail into the field where the device terminates. Since there is no change in relief in this instance, the trails are weaker. Wavy steps are a form of trails. First picture below by Ray Parkhurst. For a more detailed explanation, please see the article “Unraveling the Mysteries of Trail Dies” by Will Brooks in the July 17th 2017 issue of Coinworld Weekly. To see listings of trails, please visit http://www.traildies.com/. 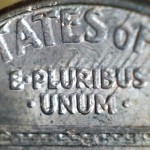 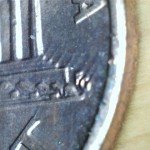 Tripled Die: A coin that was struck by a die that experienced two subsequent misaligned hubbings after the first during its creation.

Troy Ounce: A unit of measure for weight used for precious metals. A troy ounce is equal to 31.1034768 grams, as compared to the avoirdupois ounce (used for most everything else) which is 28.349523125 grams. However, there are only 12 troy ounces in a troy pound, as opposed to 16 avoirdupois ounces per pound, meaning a pound of feathers actually weighs more than a pound of gold! (If you remember the old trick question).

Two-by-two: A 2”x2” coin holder made from cardboard with a plastic or Mylar window in the middle for viewing the coin. 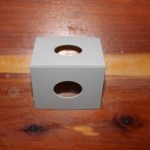